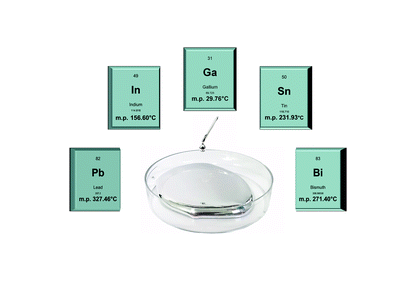 Room-temperature galliumliquid metalalloyshave drawn increasing research interests recently. These alloys not only can flow easily, but also can be shaped to some extent. They own all useful properties of other solid/molten metals such as high thermal conductivity, high electrical conductivity, inherently high density, and low vapor pressure, while being non-toxic, unlike mercury. Two important gallium-based alloys are GaInSn and EGaIn. GaInSn or galinstan is a eutectic alloy composed of 68%wtgallium, 22%wt ofindium, and 10%wt of tin. EGaIn is a similar eutectic composition of 75.5%wt of gallium and 24.5%wt of indium. Demonstrating superior performances in various aspects, gallium-based liquid metals have been explored for many novel applications, such as microfluidics devices, stretchable electronics, reconfigurable devices, electronics cooling, vacuum pumping, and painted conductive electrodes in liquid droplet actuation. However, there are also some challenges in working with these liquid metals. When exposed to air, an oxide layer quickly forms on the surface of liquid metals, which is undesirable in some applications. That said, this oxide layer is not always problematic, since it can also help stabilize the liquid mechanically. One of the leading research groups working on room-temperature liquid metals, discussed numerous emerging capabilities, and applications of gallium-based liquid metal devices enabled by the native oxide layer. One advantage provided by oxide layer is that it facilitates manipulation of gallium-based liquid metals.﻿