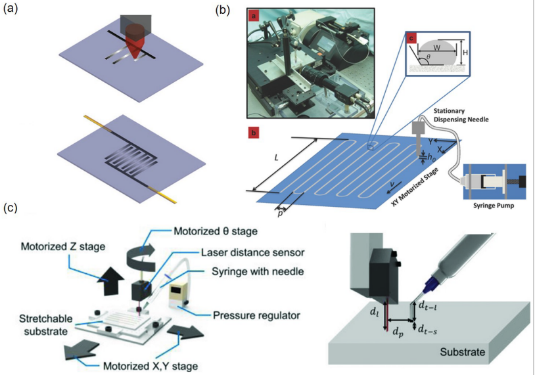 Direct printing extrudes a liquid metal through a dispensing tip, usually a syringe needle, onto a target substrate in close proximity. In general, the dispensing tip or the substrate is attached to motorized stages that can move as programmed. In contrast to lithography-assisted patterning, the direct printing does not require any preparation effort in cleanroom. One simple way of liquid metal direct printing is the liquid metal roller-ball pen method. Patterning using pen employs a ball pen filled with EGaIn ink. In general, the ball diameter ranges from 200 to 1000 um, thus the pen method is well suited to pattern liquid metal with relatively large line widths. It is also possible to print by immersing a microtip in EGaIn and then patterning EGaIn on the substrate point-by-point fashion. When small dots are created with their spacings smaller than their diameters, they merge and form patterns. In a more advanced platform, liquid metal printing is performed using a motorized XY-stage and a syringe pump. While this advanced direct printing is more efficient than the pen or the microtip methods, the resulting patterns exhibit undulation due to the pulsation in the syringe pump. To remove the undulation, the syringe pump has been replaced with a pneumatic pressure source and an electronic pressure regulator. It is also important to maintain the distance between the tip and the substrate to obtain a uniform liquid metal pattern. To this end, the distance feedback control is first demonstrated with a motorized XYZ-stage to print linear patterns along one direction on elastomeric substrates. With the aid of the nozzle tip-substrate distance control, EGaIn can be patterned reliably even the patterning substrate is locally irregular. Later, the same concept is extended to enable piece-wise linear patterns with sharp corners on top of various uneven surfaces. This new system is constructed using a motorized XYZ-stage, a motorized rotation stage, and a laser displacement sensor along with an electronic pressure regulator. The added rotation degree-of-freedom enables continuous EGaIn patterns even when the patterning direction is changed. The rotation stage can steer the laser displacement sensor and make it always precede the patterning nozzle. Therefore, arbitrary piece-wise linear patterns can be printed on inclined or curved substrates.